I would like to introduce Aventine Miniatures to my collection.  Specifically, the Early Imperial Romans.

I have recently started playing Hail Caesar with a few mates and it is a cracking game.  I already own a stack of Warlord Games Early Imperial Romans.  Hail Caesar uses bases to represent commanders at different levels in Hail Caesar and while I had a few ideas of my own while doing the rounds on the internet, I stumbled upon this on the Lead Adventure Forums.

Adam has used various figures from Aventine Miniatures Early Imperial Roman Range to make a Command Stand.  The result is stunning.  Inspiration and decision made. After exchanging a couple of brief E-mails with Keith of Aventine Miniatures, Keith has handpicked out the same figures as a Special Order for me.

Imagine my delight when my Adam's Special Early Imperial Romans arrived in the mail today.

I am very happy with the sculpting.  The casting does not let you down either.  These are without a doubt the cleanest cast pewter figures I have received in a long time.

While I am not up to Adam's standards for painting and converting, I hope I can do them justice. 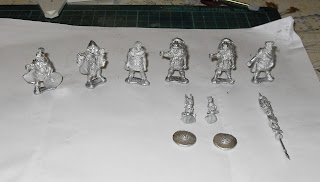 Thank you Keith and thanks to Adam for some inspiring ideas  ;)

Posted by Allan and Carmen at 7:39 PM No comments:

I have been busy but first... A drawing from my son

I will have a few updates soon with miniatures I have been working on but first a  picture drawn by my son.

Do you think he likes Miniature Wargaming much? 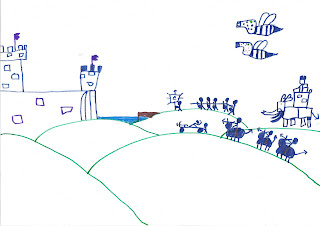 Happy Gaming to you all :)

Allan
Posted by Allan and Carmen at 6:55 PM No comments: