Guys this is not a paid advertisement.  I want to give a big nod to Gavin who owns Irresistible Force in Brisbane, Queensland.

Last week I called Gav to ask about getting my first airbrush and compressor.  Gav spent 40 minutes on that one phone call in addition to a few e-mails.  At the end of the call I had received great advice and could place an order with confidence and am very satisfied with my purchase.

More than once I have called up with questions about painting miniatures.  Gav has won quite a few painting awards and also commission paints in addition to running his store.  With a wealth of experience, he is always willing to take the time to give advice in person or over the phone.

If you are lucky enough to drop into Irresistible Force you will see Gav puts his money where his mouth is and stocks a wide variety of paints, resin bases and a plethora of other hobby supplies and miniatures from different companies.

Great customer service and excellent advice on the painting as well as the products he stocks.  He has always gone the extra mile with a friendly, no nonsense approach to dealing with customers.  Any e-mails or queries are always answered quickly.

After some hit & miss service from another store it is great to have found Gav at Irresistible Force (even if it is a 2 hour drive away).  Fortunately Gav's also has an online store :)

Happy Gaming & big props to Gav!
Posted by Allan and Carmen at 8:30 PM No comments:

Time for an update.  Gaming has been minimal due to a hectic family life and the joy of having a dodgy back from the Army.

I am very fortunate to have some great mates in our gaming group that don't mind.  Since I last posted, I have played Napoleonic Black Powder in 15mm, Hail Caesar in 15mm, Flames of War, and lastly SAGA.

The difference between playing 15mm and 28mm is interesting.  15mm armies can make the game look like more of a battle rather than a skirmish.  I started up a Republican Roman Army in 15mm (since I already own some very nice 28mm Warlord Games Early Imperial Romans). 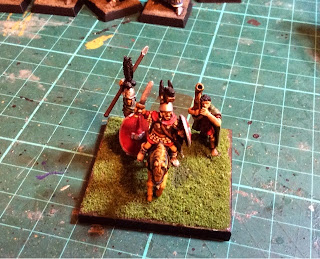 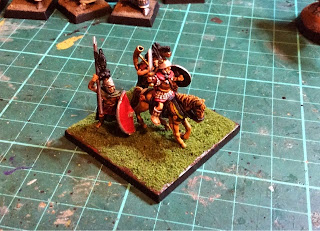 These are very nice Xyston miniatures. And the above is one of my Works In Progress Command bases for the Army.  As is the one pictured below. 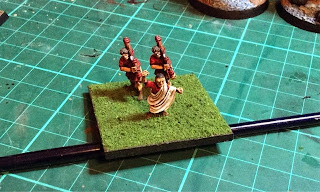 Base coat, ink wash and highlight.  I will get the hang of painting 15mm yet! 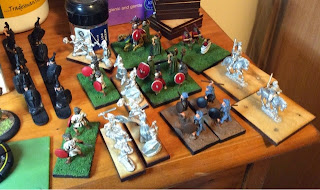 I still enjoy playing Flames of War and have been slowly painting some US Airborne I picked up years ago.  Here is a test piece.  Apologies for the poor pictures. 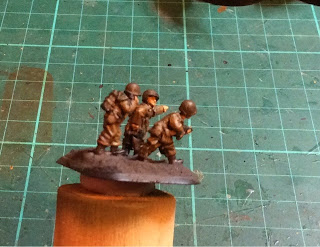 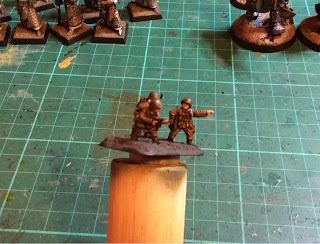 I knocked together this to make handling figures easier while painting.  Very high tech to be sure.  Simple and it works extremely well.  A length of dowel cut into smaller pieces and a old block of pine with holes drilled slightly bigger to sit the dowel in.  Great for undercoating with a spray can or airbrush as you can get up underneath a figure.  I picked the dowel to be the size that felt most comfortable in my hand. 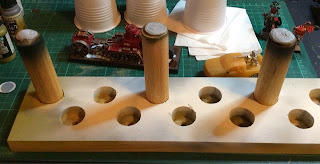 I painted up an old GW Ork Skorcha Buggy for my eldest son.  I still play the occasional model game with the boys and I always end up playing the "bad guys" and losing to the "good guys" played by my sons.  Great fun to be sure and I enjoy anytime I get to spend with the boys.

The white liquid on the base is some water effects I am messing around with for fun before trying something more serious. 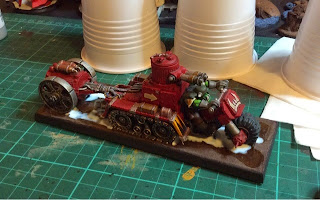 As I have moved away from GW games I have been playing around with other periods including Moderns like these excellent USMC figures by Elhiem miniatures in 20mm scale. 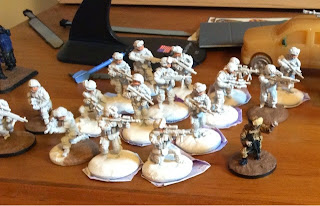 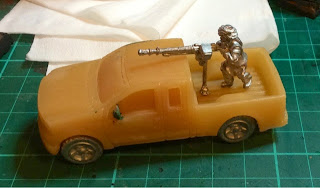 I mentioned SAGA earlier and while I play Normans I painted up this Anglo Dane Warlord from Gripping Beast to use and finished him off with one of the very nice shield transfers from LBM Studios. 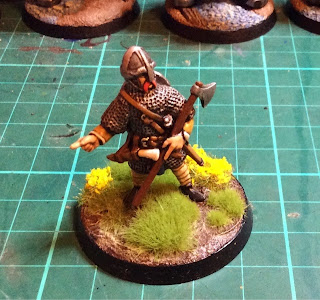 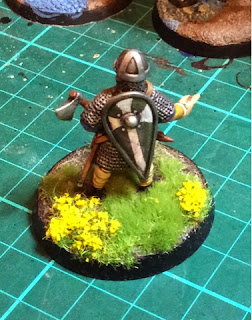 Lastly, I started messing around with some Perry Miniatures ACW plastic cavalry I had been using to make Rough Rider Conversions for my Old Imperial Guard army.  I have no interest in the ACW but it is a challenge to paint something different so started playing around with them. 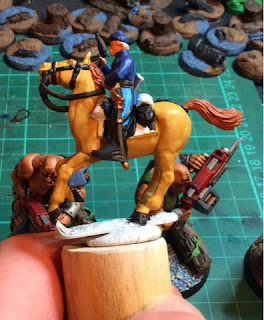 My new airbrush arrived last week and I cannot wait to get some practice and churn out more painted figures.  Until next time Happy Gaming!